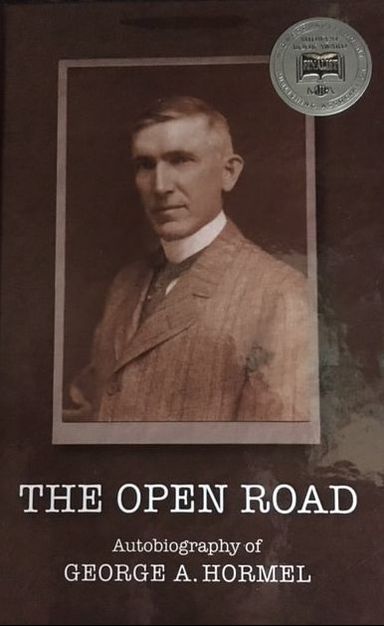 Published in 2017, the autobiography of George A. Hormel entitled The Open Road will educate and inspire anyone moved by real history.  This isn't a how to make it rich story; it's a story of a man who made his success.  George A. Hormel landed in Austin, MN in 1887 disappointed that he hadn't made anything of his life.  By age 27 he had already been out of school for 14 years and working in a variety of jobs.  From installing lath, working on Toledo docks, and in the grueling Chicago stockyards, George learned life and business lessons that would lead him to his eventual success in Austin, MN.  From his family and faith, he learned life lessons that carried him through the ups and downs and made him a compassionate, honest, and admirable person.

The Open Road is the chronicle of Hormel's journey from Buffalo, NY, to Toledo, OH, through the Midwest, and eventually to Austin, MN.  The stories of his German heritage and family ties, his experiences on the road, and his business philosophies make the book relevant to everyone.

Thomas D. Hormel and James C. Hormel, grandsons of George, chose to make their grandfather's legacy available for the world to appreciate.  George wrote his book in the early 1940's, but it was never published for public viewing until now.  History lovers and business leaders will enjoy this book and will gain an understanding of an era and a man now gone.

A Finalist in the Midwest Book Awards program, The Open Road is a highly regarded memoir that all should embrace.

Books are available online in hard or soft copy.  They can also be purchased at the Hormel Historic Home or Sweet Reads Books and Candy in Austin, MN.
Purchase Open Road

What others are saying...

"Hormel’s memoir chronicles his rise in business from the 19th into the 20th century.

James C. Hormel, a former U.S. ambassador, stumbled upon a memoir written by his paternal grandfather, George A. Hormel, the founder of Hormel Foods, which produces Spam and other food brands. The autobiography begins in 1873, when Hormel was 13 and a nationwide economic panic hobbled his father’s tannery in Toledo, Ohio, and compelled him to quit school and seek work. Hormel moved to Chicago to work for his uncle, and by 19, he had been employed for six years in three different industries. He was a talented wool buyer for years, but a lonely life on the road was unfulfilling; he became too fond of gambling and struggled to get ahead. With a $500 loan from his boss, the entrepreneur started his own business in Austin, Minnesota—a general supply depot for the meat industry. Hormel weathered extraordinary challenges—an economic depression in 1907, disastrous floods, poor crop harvests, and hog epidemics—and finally built a business successful enough to list on the Chicago Stock Exchange in 1929. When the stock market crashed, he retired and handed over the company’s reins to his son, Jay. In elegant, charming prose, the author also recounts lessons he learned from his greatest influences, first and foremost his father, John George Hormel, about a wide range of subjects including the nature of business, the intersection of commerce and government, and his religious convictions. One of the recurrent themes of the book—another lesson delivered by his father and beautifully related by Hormel—is the balance between one’s trust in God and one’s reliance upon oneself: “Like all deeply religious men, he believed in the ultimate justice and wisdom of Providence. But he clearly saw that since men were the instruments on this earth through whose free will their Maker had chosen to manifest Himself, progress inevitably waited on the speed with which they comprehended their possibilities.” Hormel’s account of technological innovation in relation to business is extraordinarily
prescient and should be of instructive interest to thoughtful entrepreneurs. In an age saturated with business-driven self-help books offering flimsy and familiar counsel, this is a more serious, historically fascinating alternative. Black-and-white family photos are included.

A gracefully distilled account of a remarkable life in business and beyond."

From Deb Nicklay, Austin Daily Herald Reporter:
"What is astonishing about George A. Hormel's autobiography, "The Open Road," is not only his account of Hormel Foods' founding – although its history is fascinating. The bonus in this memoir is the vivid panorama he paints of life in America's evolving Industrial Age."

From Stephan E. Rowe, Hormel family descendant:
"This is a great story told by a great man.  By the end of the book, I felt that I had just spent the evening listening to and conversing with George A. Hormel.  This book is simply a pleasure to read and a great addition to any personal or public library."
​Trip Advisor
Regular Office and Tour Hours
Monday-Friday 10am-4:30pm
Special Event Hours Vary
Newsletter:      ​View the current newsletter    Subscribe to our monthly newsletter by submitting your e-mail on the home page.
© Copyright 2016. Hormelhistorichome.org. All rights reserved.