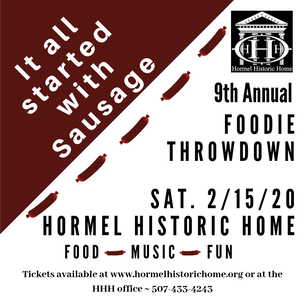 The team representing the Austin Public School District, who called themselves “Not Your Average Lunch Ladies,” won the dessert category with a Savory Maple Sausage Bread Pudding topped with Maple Sauce.  Their main dish, Ooey Gooey Five Cheese Sausage Macaroni and Cheese was ooey and gooey and scrumptious.

Veteran Wade Kolander served homemade sausage eggrolls with a choice of dipping sauces, spicy and sweet.  His dessert, a sausage cake with espresso drizzle, was both unique and delicious!

Finally, Austin native, now LaCrosse resident, Joel Morrison brought Schuby’s Neighborhood Butcher to town to compete for the first time.  Their Vietnamese Lemongrass Sausage Meatball paired with Curried Carrot Puree added an international flair to the night.  And they even cooked apricot bread pudding in a sausage casing and then topped it with a whiskey and caramel glaze.  “They didn’t put sausage in the dessert…they put dessert in the sausage [casing]…” the team was proud to announce.
The 8th Annual Foodie Throwdown was a SOLD OUT event and we are grateful to all who showed support to the Hormel Historic Home by attending or cooking or volunteering.
5  Chef teams will competed for votes and the results were very close. 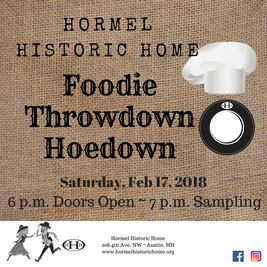 2018 Foodie Throwdown
THANKS to everyone who supported the annual fundraiser for the Hormel Historic Home through attending or donating toward the event.  It was another great and delicious success.
The Hoedown Showdown featured 6 chef teams:
The SPAMagic Duo Terri Bergstrom with Shelly Hovland, Father & Daughter Team Neal & Berghyn Hull, Hy-Vee's Chef Kristine, Hoot and Ole's Jeremy Olson with Kathi Finley of Just Take the Cake, the Just Neighbors Team of Leah Erickson and Kim Schulte and the Wicked Kitchen featuring Wade Kolander.